It’s never an easy task filling the boots of a member of band who has passed away, especially when that member was an undeniably strong presence in the outfit in question. This was a task that fell into the hands of Eddie Hermida, picking up the microphone from where the late Mitch Lucker left off following a tragic accident in 2012. Stepping away from All Shall Perish to take this great opporunity with both hands, Suicide Silence dropped their latest album ‘You Can’t Stop Me’ earlier this year, and evidently the title is more than apt. Currently on a headline run across the UK to support this release, we spoke with the powerhouse vocalist himself to learn more about his craft.

I remember Cannibal Corpse’s ‘Tomb Of The Mutilated’ and Slipknot’s self-titled albums both made me really want to be a frontman. Those bands just made me want to delve into the darker side of music and metal. They made me want to be a deranged vocalist. I will always be a fan of Randy Blythe (Lamb Of God). He just has a natural control and really pissed off sounding voice. Another would have to be Layne Staley (Alice In Chains). His voice will always make me want to cry. That’s what a vocalist should do. Make you feel human.

PRACTICING AND STARTING OUT:

I would suggest just being in a band and picking covers everyone is into. Not everyone is made to scream. Even if you are, it really takes a while to find your own screaming voice. Remember that metal is all about passion, so mean what you say and say what you mean. Rock and roll isn’t about the practice, it’s about the action. I would also suggest going and taking some regular singing lessons. Screaming is an advanced form of singing, so learning the basics never hurts.

I usually take an hour before hitting the stage to dress, get stretched out, and do my vocal warm ups.

THE IMPORTANCE OF THE DIAPHRAGM:

The diaphragm is life. Without it, you wouldn’t be able to sing. Singing is the strongest workout for your diaphragm. Just start a band and do it. That’s the best way to put yourself out there. I used to swim and play trombone growing up, so I had a lot of diaphragm control when I first picked up the mic.

Do not sing death metal, plain and simple, If you don’t want to damage anything, don’t do it. There’s nothing right about screaming. It’s unnatural and it definitely hurts. Don’t be a pussy, though. Results vary but the feeling of jamming with a band at full volume will always feel the same: fucking awesome!

If you have done something wrong, just stop singing for a few days to let the swelling in your chords go down, and don’t whisper. I don’t have that luxury on tour, so I tend to really be careful not to over do it on stage. Control is a must. Control, control, control.

Acknowledge when you’re tired, don’t kiss strangers and avoid getting sick at all costs. As a vocalist, getting sick is your worst enemy. It makes your vocals swell immediately on stage and changes your range. If and when that happens, I tend to utilize one voice more than the other. It’s a defense mechanism I do without thinking these days. Muscle memory, if you will.

Honey, sugar, milk, or any other recipe for healing the voice is all bullshit. Nothing helps more than water and rest people. 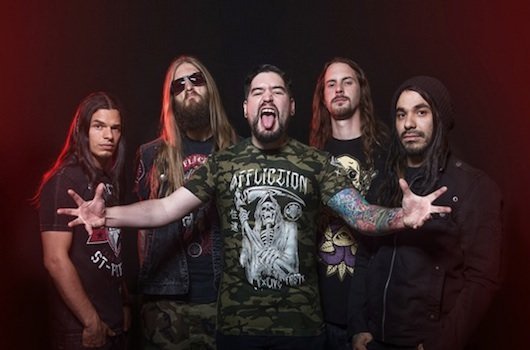 Suicide Silence‘s fourth studio album, ‘You Can’t Stop Me’, is out now through Nuclear Blast Records.

Are you in a band? Do you own a label or PR company? Want to share your experience and tips with others aspiring to do the same thing? Get in touch with our features editor, MG Savage (email or Twitter), and we can share your tricks of the trade.

VIDEO: Suicide Silence – You Only Live Once (Behind-the-Scenes)

Metal monsters Suicide Silence have revealed a behind-the-scenes sneak peek of their upcoming music video for ‘You Only Live Once’, taken from their new album ‘The Black Crown’. Find out what you can expect below: Read More

VIDEO: Suicide Silence – You Only Live Once

Suicide Silence face a heavy hail of gunfire in their new music video for ‘You Only Live Once’. There’s only one way to see if they manage to survive an attack from a bow and Read More

Recently, Californian deathcore outfit Suicide Silence confirmed that they’d finished recording their sixth full-length, and now they’ve started to spill the details of what they put together. Read More

Deathcore kings Suicide Silence have released a video sampler for their upcoming new record ‘You Can’t Stop Me’, which features brief clips of all the tracks. The album drops July 14th via Nuclear Blast Records. Read More

NEWS: PVRIS annonuce details of ‘Use Me’ livestream!