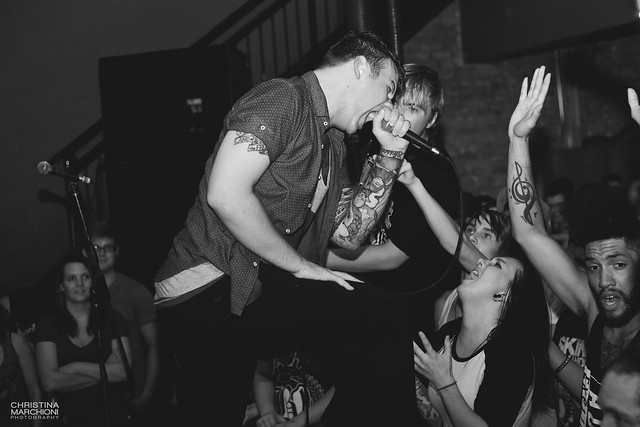 At only 21-years-old to date, Caleb Shomo has already achieved with his current band Beartooth and previous outfit Attack Attack! more than what most vocalists do a decade older than him, and we’ve not even mentioned his work as a producer or composer both in and out of the metalcore scene. With so much under his belt at such a young age, we spoke with Caleb about his work as a vocalist, including his warm up techniques, keeping his voice healthy on the road, avoiding damage and more. Passing his wisdom on, maybe we’ll see some more great young vocalists coming from the woodwork.

I love Queen, and Freddy Mercury is a big inspiration to me. Also, the Temptations were a massive influence. I’d have to say my favourite vocalists would have to be Freddie Mercury, David Ruffin and Ben E. King. I love the song ‘Stand By Me’ by Ben E. King, also ‘My Girl’ is a classic. Nowadays there’s seriously too many to count, but I think Jason Butler from letlive. is a very cool singer. He has great voice, and it’s unique.

I just love to sing, honestly. One of my dreams would be to sing in the 50s era. There were so many amazing singers back then. STARTING OUT AND LEARNING THE BASICS:

Honestly, I just started by turning up music real loud in my headphones and trying to sing along to songs, because I was embarrassed of how I would sound. Once I got comfortable just actually yelling notes out, I started to mess with learning other aspects of it. It’s all with practice and working out. Breathing exercises and vocal practice is your best bet.

It depends on how I’m feeling that day. Usually I’ll warm up for about 15 to 20 minutes if my voice feels a bit shaky. I never saw the DVDs, but I did a lesson with Melissa Cross a while ago and she showed me some good warm ups. It helped a good bit, not so much with my technique but with my breathing and pitch control.

If it hurts when you sing you’re definitely doing it wrong, especially if you’re screaming or yelling. If it starts to hurt, the best thing to do is be quiet and drink water. Vocal rest helps a lot too. Take time after your set and don’t talk for a while, and stay very hydrated. When you’re onstage, don’t overdo it out of the gate. Try and stay consistent for the whole show. It shouldn’t take it all out of you to sing. If it’s too straining, you need to work on it.

Are you in a band? Do you own a label or PR company? Want to share your experience and tips with others aspiring to do the same thing? Get in touch with our features editor, MG Savage (email or Twitter), and we can share your tricks of the trade.

Date: June 11th, 2016 Venue: Donington Park, Donington Website: www.downloadfestival.co.uk Facebook: www.facebook.com/downloadfest Twitter: www.twitter.com/downloadfest It would come as no surprise if the 2016 run of Download Festival would be known forever going forward as the Read More

FEATURE: 15 unreleased albums that we may never, ever hear!

Sometimes bands write and record a full album and then, at the last minute, they decide that they just don’t want to release it. They shelve it, it collects mounds of dust for a number of years, and sometimes it never sees anything more of the world than that. Read More

According to a report published by Note To Scene, crabcore originators Attack Attack! have apparently reformed and are in the studio. Read More

The American crabcore inventors Attack Attack! (the Welsh band has two exclamation marks in their name) are to come to the UK for the first time in October. Check out what dates they’ll be about: Read More

Post-hardcore newcomers Beartooth have released the video for their track ‘The Lines’, lifted from debut album ‘Disgusting’, out now via Red Bull Records. Check it out below: Tony Bliss