The Deep South is an odd place, but it’s one that has given birth to some of the greatest bands around today. Southern infused metal has spawned Pantera, Hellyeah, and Lamb Of God to name a few. These are just some of the names that spring to mind but there are, of course, thousands more out there. In recent years, with the rise in popularity of hardcore music, Every Time I Die have come into their own. ETID‘s unique blend of southern guitar licks and whisky soaked twangs over devastating hardcore breakdowns and break neck ruthless riffs saw them explode over night. After 7 albums and many world tours, they’ve not let fame change who they are and they remain humble to this very day.

With success comes imitation, though the bands selected below are not a bunch of sell-out copycats, far from it in fact. Each have their own sound personal to them, one that is laced with the familiar southern accents and country vibes of ETID. To celebrate the release of their new album, ‘From Parts Unknown’, we’ve compiled a list of smaller bands similar in sound to one of the greatest bands on the hardcore scene today.

Okay, so they aren’t exactly an ‘unknown’ band and yes, they are from the opposite side of the continent (Canada), but Cancer Bats do hold dear the true values of southern hardcore. With Liam Cormier‘s husky screams over the licks of Scott Middleton‘s riffs and solos, they have a sound slightly more upbeat than ETID, but damn it, if they aren’t just as destructive during their live shows.

With a name like that, you know they’ve got to have some kind of dixie element mixed into their sound. Though some of their more recent discography leans towards the rock side of the spectrum in places, they still have some dangerous tracks up their sleeves that pack one hell of a punch.

Hailing from North Carolina, right on the outer edge of the Bible belt, He Is Legend are quintessential southern hardcore. Following a brief hiatus, the band reunited in 2011 and are still making music, even though it’s more on the psychedelic side of things. Below is a list of their more hick-friendly ditties.

Even though they’re on the wrong side of the pond, it doesn’t stop Feed The Rhino from producing some of the best southern infused hardcore around, especially in the UK. Known for their chaotic live shows, this is one band you simply have to see live to experience the full force of the rhino.

With seven albums in just fourteen years, Stray From The Path certainly are a hard working angry bunch. Though the majority of their repertoire is hardcore based, there are certainly some southern elements in their later tracks. Having supported ETID during one of their UK tours, it’s safe to say that they hold the same level of ferocity during their live shows.

Times are harder than ever these days for musicians, and sadly some many great acts have had to call it day. Below is a list of bands similar to ETID, but are no longer active. Just because they aren’t making music anymore doesn’t mean that we can’t still appreciate them. They’re gone, but in no way are they forgotten.

Louisiana born and bred, this four-piece were plagued with shaky line-up changes throughout their short-lived career, but this didn’t stop them making some fantastic hardcore anthems. Though they have just one album to their name, it’s still a hell of an album and one well worth checking out.

This band will sound most like ETID mainly because it’s a supergroup with ETID frontman Keith Buckley on vocals and former bassist, Josh Newton. Technically, they’re on indefinite hiatus, but we all know what that means. They have just one album to date, ‘Ironiclast’, which went to number 1 on the US rock charts. Considering the line-up features Rob Caggiano (of Volbeat), Scott Ian (of Anthrax), and Andy Hurley and Josh Newton (of Fall Out Boy), it’s safe to say that ‘Ironiclast’ damn well warrants a listen.

‘We’ve Got A Situation Here’ (taken from ‘Ironiclast’)

Other than a few songs dotted about on YouTube, there’s sadly little much to find online about A Girl A Gun A Ghost. All that can be found is a bitter break-up statement from frontman Matte Wagner, which you can read here. Either way, it’s the music that matters, and they left some damn fine music behind too.

‘That Girl’ (taken from the ‘Save This City’ EP)

Started over a love of Lynyrd Skynrd, AC/DC and Mötley Crüe, Fight Paris launched onto the scene in 2003 and went on to release their only album, ‘Paradise, Found’, in 2006. Though they’ve split, most members reformed to make StoneRider, which was the same as before only much more toned down. Take a listen to the southern fury of their glory days below. 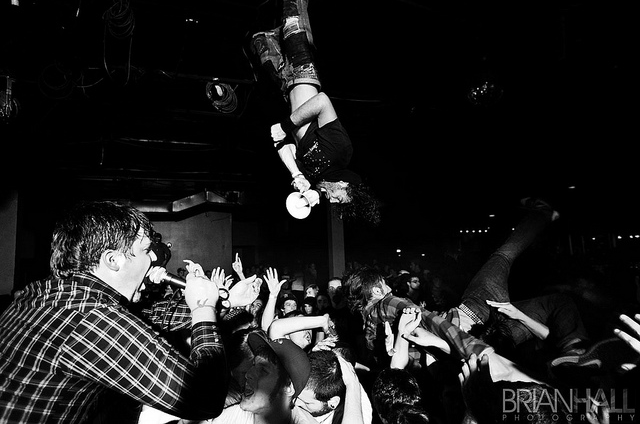 It’s always sad when a band with the calibre of The Chariot calls it a day, but at least this way they ended on the highest of highs. With five fan-fucking-tastic albums in their rich and vibrant discography, you have plenty of material to satisfy your lust for southern hardcore. Though there are countless songs in their arsenal that could’ve been selected, ‘David De La Hoz’ made the cut, simply because of the incredible 6 minute continuous shot video that accompanied it. Do yourself a favour and watch it now.

ALBUM: Every Time I Die – The Big Dirty

VIDEO: Stray From The Path – Badge And A Bullet

Hardcore mob Stray From The Path have released the video for their new track ‘Badge And A Bullet’. Check it out below. Tony Bliss

Having only treated us with their debut single ‘We’re Coming In’ a few weeks ago, Los Angeles based politically and socially aware supergroup The Fever have debuted yet another song, titled ‘Hunting Season’, originally showcased Read More

AUDIO: He Is Legend – This Will Never Work

North Carolina four-piece He Is Legend have just debuted a new track, titled ‘This Will Never Work’, lifted from their highly awaited upcoming studio album, ‘Heavy Fruit’. You can listen to it below: Zach RedrupFounder Read More

Hardcore legends The Chariot have unveiled an hour long farewell documentary, which is entitled ‘Forget Not’ and documents the band’s final shows before their decision to split one year ago today (November 24th 2014). You Read More

With their fist announcement bringing an already sterling line-up for this year’s Hevy Fest, the event organisers have upped themselves from last year already with their latest confirmed additions to the bill. Zach RedrupFounder & Read More