Musical differences aside, Marilyn Manson‘s and Justin Bieber‘s supposed friendship that came into light last year was definitely unexpected, especially with Bieber being a man of God and Manson being quite the opposite, and even being the self-proclaimed “Antichrist Superstar” and “The God of Fuck”.

Yet, it seems their friendship hasn’t lasted very long, and that it has come to crash and burn due to Bieber‘s selling of a repurposed Manson t-shirt stating “Bigger Than Satan… Bieber”, and also offending Manson directly by telling the shock rocker that he made him “relevant again” by doing so, and by wearing Manson merch.

In an interview with Consequence of Sound (here), Manson says that when he first met Bieber “he was [already] wearing the shirt that had his name on my shirt, and he said to me, ‘I made you relevant again’. Bad mistake to say to me.”

“He was a real piece of shit in the way he had the arrogance to say that. He was a real touchy-feely guy, too, like, ‘yo yo bro!’ and touches you when he’s talking. I’m like, you need to stand down, you’re dick height on me, ok? Alright? So stand down, son.”

“The next day I told him I’d be at his soundcheck at Staples Center to do ‘Beautiful People'”, Manson recounts, at which point Bieber confessed that the t-shirt “was his idea”. Manson never intended to perform with Bieber, but “he believed that I’d show up, because he was that stupid.” 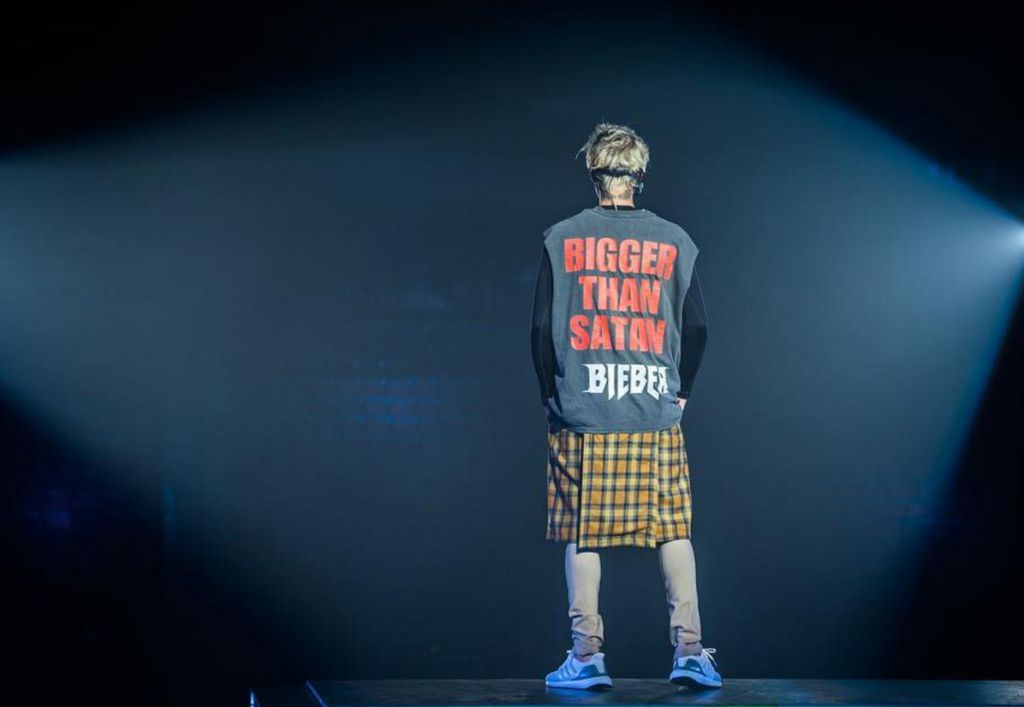 The repurposed t-shirt in question was being sold for $195 at luxury retailer, Barneys. At the time, the t-shirt’s designer, Fear of God, was adamant that Manson had given both him and Bieber permission to “reinterpret” the original image.

Manson says that he eventually “took all the proceeds from those shirts from him. They didn’t even fight, they were just like, ‘yeah, we already know, we did wrong, so here’s the money’.”

Those of you interested in official Manson clothing collaborations can find some over at Killstar for both men (here) and women (here).

Those of you wanting to buy some official Marilyn Manson merch can do so from Impericon (here), Bravado (here), EMP (here), Hot Topic (here).

NEWS: Winners of The APMAs 2016 confirmed!

Once again proving to be one of the most prestigious evenings of celebrating today’s rock talent all year around, the 2016 edition of The APMAs saw a string of winners, including Neck Deep, You Me Read More

The first remix for one of Marilyn Manson‘s new songs off his latest record, ‘Born Villain’. You can hear Deathface‘s reworking of ‘No Reflection’ through the embedded player below: Zach RedrupFounder & Editor for DEAD Read More

VIDEO: Against The Current – Let Me Love You (DJ Snake & Justin Bieber cover)

Having already spent most of this year so far pushing their way through the ranks of their pop-rock peers, Poughkeepsie’s Against The Current have just dropped a new cover of ‘Let Me Love You’ by Read More

Returning shock rocker Marilyn Manson have unveiled the music video for his new track ‘Deep Six’. The song is lifted from his forthcoming album ‘The Pale Emperor’, out January 19th 2015 via Cooking Vinyl/Hell etc., Read More

Though known most prominently for his career within music and controversial live performances, Marilyn Manson has also proved to be quite the master in other areas of the creative spectrum, including art, fashion, and acting Read More

GETTING INTO: Marilyn Manson

Though not as revered or as feared as he once was back in his glory days of the mid 90s/early 00s, Marilyn Manson‘s impression on the face of music and their controversial image and messages Read More