Welcome to part five in a series of features previewing this year’s Download Festival. Each week, we shall be looking at a particular genre or scene that will be represented at the festival. You may have heard some of the more established bands, but these previews may introduce you to similar bands that are in the same vain.

In part five, we will be looking at some of the longer running bands (with a few exceptions here and there) specifically within the heavy metal genre.

Where?: Jim Marshall stage
When?: Saturday @ 8:50pm
Who do they clash with?: The Hives (Pepsi Max), Rat Attack & Last Witness (Red Bull)
Listen: Fear Of The Dark (Live at Download Festival 2007)

Iron Maiden will be one of THE bands at Download to watch this year. They’re still going strong after 1000 years and are the main draw for many. Lots of fans may think of them as too old, but the spectacle of seeing Maiden live is truly something else. ‘Fear Of The Dark’ will be one of the moments of the festival for sure. 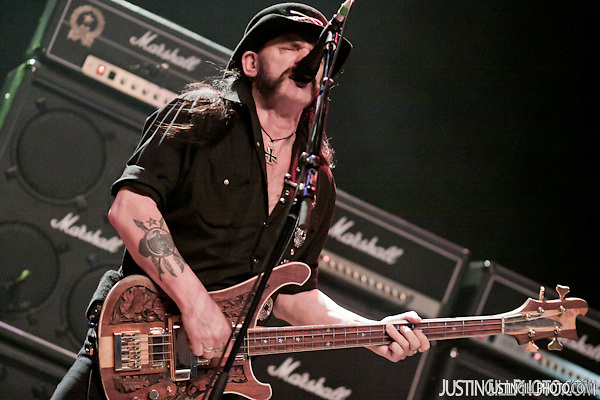 Regular Download Festival attendees, you’ve probably seen Mötorhead at least 700 times by now, but at least you know what to expect. Nobody has a clue what Lemmy is saying the entire time, but damn can he play some good music.

There are many question marks over whether DragonForce can actually play their songs live, but there’s no doubting the talent of all their members. New vocalist Marc Hudson seems has stepped into the shoes of his predecessor comfortably.

Where?: Zippo Encore stage
When?: Friday @ 4:55pm
Who do they clash with?: Down (Main), In This Moment (Pepsi Max), Verses / Hoax (Red Bull), Hear Kitty Kitty / Walking Papers (Jagermeister)
Listen: The Final Countdown (Live at Bloodstock Open Air 2009)
Why?: It’s the reason you were expecting, but who can honestly hate ‘The Final Countdown’?

Where?: Zippo Encore stage
When?: Friday @ 2:45pm
Who do they clash with?: Asking Alexandria (Main), Patent Pending (Pepsi Max), Avosetta / Rob Lynch (Jagermeister)
Listen: Easy Livin’ (Live)
Why?: Uriah Heep formed in 1969 and are considered among the ‘big 4 of hard rock’ with Black Sabbath, Deep Purple, and Led Zeppelin. They are, however, the Anthrax of the group.

Where?: Main stage
When?: Saturday @ 11:00am
Who do they clash with?: I Divide (Zippo), Broken (Pepsi Max), Cytota (Red Bull)
Listen: Lights Out (Music Video)
Why?: Your introduction to day 2 of music on main stage will come in the form of UFO, another one of the old guard who will no doubt have something to say about all these kids running around.

Where?: Pepsi Max stage
When?: Sunday @ 6:05pm
Who do they clash with?: The Gaslight Anthem (Main), Airbourne (Zippo), Heaven’s Basement (Jagermeister)
Listen: Soldierhead (Music Video)
Why?: Jason Newsted (ex-Metallica) is a very easy performer to overlook on the line-up, but just have a listen to ‘Soldierhead’ off the newly released ‘Metal’ EP and see if your opinion is changed.

Where?: Pepsi Max stage
When?: Saturday @ 6:05pm
Who do they clash with?: Motorhead (Main), Jimmy Eat World (Zippo), Devin Townsend (Jagermeister)
Listen: Poison Apple (Audio)
Why?: Uncle Acid are riding a tsunami sized wave of hype at the moment thanks to a run of sold out shows in the capital. Faced with a difficult clash, Uncle Acid will still provide a more than worthy alternative.

Where?: Zippo Encore stage
When?: Saturday @ 5:20pm
Who do they clash with?: Motorhead (Main), Bury Tomorrow (Pepsi Max),  Terrorvision (Jagermeister)
Listen: Backstreet Symphony (Music Video)
Why?: Yes, Thunder are still going despite their continued insistence that they will be splitting up. An absolutely rammed tent in 2009 saw them put on one the sets of the festival on third stage, so expect more of the same on a bigger scene this time round.

This band has pulled out of this year’s festival.

Where?: Pepsi Max stage
When?: Sunday @ 1:15pm
Who do they clash with?: Coal Chamber (Main), The Ghost Inside (Zippo), Black Dogs (Red Bull), The Graveltones (Jagermeister)
Listen: Supersonic (Music Video)
Why?: One of those ‘we finally made it’ stories surrounds Little Caesar thanks to their long but largely unnoticed career. Expect a tearjerking set on third stage (if anyone watches them).

Where?: Red Bull stage
When?: Friday @ 1:45pm
Who do they clash with?: Architects (Main), Palm Reader (Pepsi Max)
Listen: http://www.youtube.com/watch?v=7xFYmCfZcyE
Why?: A late addition, Free Fall are another band that have been suckling at Led Zep’s teets and have come out sounding great.

Where?: Jagermeister stage
When?: Sunday @ 1:50pm
Who do they clash with?: Five Finger Death Punch (Main), Graveyard (Zippo), Brutality Will Prevail (Pepsi Max), Huntress (Red Bull)
Listen: Time To Escape (Music Video)
Why?: Night By Night sound like a damn good band that capture the spirit of Def Leppard and the feel of the 80s.

Where?: Jagermeister stage
When?: Sunday @ 5:10pm
Who do they clash with?: Ghost (Zippo), Red Fang (Pepsi Max), The Howling (Red Bull)
Listen: Love In Spirit (Audio)
Why?: On the acoustic stage, it remains to be seen how much of an impact Pig Iron will make, but they don’t look like the sort of chaps to shy away from a challenge.

After already confirming earlier this week both Black Sabbath and Iron Maiden to be headlining the main stage at Download Festival next year on Saturday and Sunday respectively, Rammstein have just been announced as the Read More

Another line-up announcement has just come in from Download Festival‘s organisers, adding another hefty batch of bands to this year’s already impressive weekend bill, including The Used, Emmure and Killswitch Engage. You can view all Read More

Date: June 10th, 2016 Venue: Donington Park, Donington Website: www.downloadfestival.co.uk Facebook: www.facebook.com/downloadfest Twitter: www.twitter.com/downloadfest It would come as no surprise if the 2016 run of Download Festival would be known forever going forward as the Read More

Download Festival have announced 7 more bands for the 2013 Festival. Zach RedrupFounder & Editor for DEAD PRESS! | Atheist and antitheist. | Judge of the quick & the dead since 1989.

Ahead of the release of their new studio album ‘The Book Of Souls’ next week, British heavy metal veterans Iron Maiden have launched an online via game on their website, titled Speed Of Light. Zach Read More