Welcome to part seven in a series of features previewing this year’s Download Festival. Each week, we shall be looking at a particular genre or scene that will be represented at the festival. You may have heard some of the more established bands, but these previews may introduce you to similar bands that are in the same vain.

In part seven, we’ll be previewing bands in the hardcore genre – those more likely to be causing a ruckus than starting any sing-alongs.

Where?: Pepsi Max stage
When?: Friday @ 7:55pm
Who do they clash with?: Bullet For My Valentine (Main), Gogol Bordello (Zippo), The Algorithm (Red Bull)
Listen: Dark Horse & Hellbound (Live at Sonisphere 2010)

Converge are an absolutely insane band on record, and that transfers to the live atmosphere in excess. Jacob Bannon‘s terrifying stage presence will make you run for cover, only to be mauled in the mosh pit. A pretty awful clash with Bullet For My Valentine will at least mean that only the faithful are there to witness Converge raze the Pepsi Max stage to the ground.

Where?: Jim Marshall stage
When?: Sunday @ 11:55am
Who do they clash with?: Hellyeah (Zippo), States Of Panic (Pepsi Max), The First (Red Bull), Arthemis (Jagermeister)
Listen: Hail Destroyer (Live)

Returning after their cancellation last year, Cancer Bats‘ early slot on main stage may well prove to be the highlight of the day. Liam Cormier has been jaunting across the land with AxeWound but his main venture are less core, more hard. How exactly Cancer Bats plan to transfer their hectic live shows to such a large setting should be worth the attendance in itself. Leave your gran at home. 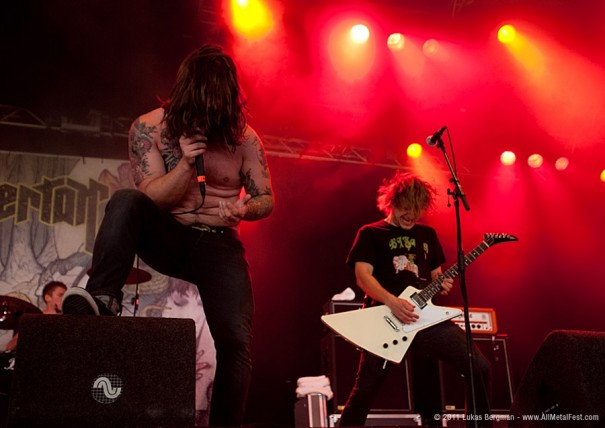 Arguably the most exciting band in hardcore at the moment, Kvelertak bring their blackened hardcore to Download Festival for the first time this year. Fresh off the back of world-melting second album, ‘Meir’, the Norwegians are renowned for their live sets. Not one to be missed.

Where?: Pepsi Max stage
When?: Sunday @ 2:00pm
Who do they clash with?: Five Finger Death Punch (Main), Huntress (Red Bull), Night By Night (Jagermeister)
Listen: Heavy Eyes (Live at Ghostfest 2011)
Why?: Brutality Will Prevail are part of the new trend of uber-heavy hardcore that makes you ponder killing everyone in sight. Show your support for the UK scene by hitting up their set mid-Sunday.

Where?: Pepsi Max stage
When?: Sunday @ 4:25pm
Who do they clash with?: Stone Sour (Main), Rival Sons (Zippo), Crash Mansion (Jagermeister)
Listen: Hard Times (Music Video)
Why?: Recently rejuvinated NY hardcore veterans Vision Of Disorder will pick up the pieces from Brutality Will Prevail‘s earlier set and smash them further beyond recognition.

Where?: Red Bull stage
When?: Saturday @ 9:55pm
Who do they clash with?: Iron Maiden (Main), The Hives (Zippo)
Listen: The Void (Music Video)
Why?: The second alternative to Iron Maiden on main and The Hives on third is Last Witness, who will come on stage around 10:00pm (!) to make sure no-one will be getting any sleep on Saturday night.

Where?: Pepsi Max stage
When?: Friday @ 3:25pm
Who do they clash with?: Papa Roach (Main), Dragonforce (Zippo), Rob Lynch (Jagermeister)
Listen: Hang The Bastard (Live at Outbreak Fest 2011)
Why?: Hang The Bastard are dirty hardcore incarnate, mixing in some chewy sludge for good measure. Fuck the pussies on the other stages, watch Hang The Bastard.

Where?: Pepsi Max stage
When?: Friday @ 1:45pm
Who do they clash with?: Architects (Main), Free Fall (Red Bull)
Listen: Spineless (Music Video)
Why?: Well now, Palm Reader are pretty terrifying. Why they’re on at the same time as Architects is anyone’s guess, but if main stage isn’t your thing then prepare to get your shit kicked in on third.

Where?: Red Bull stage
When?: Saturday @ 4:25pm
Who do they clash with?: Alice In Chains (Main), Lit (Zippo), Heart Of A Coward (Pepsi Max), Buffalo Summer (Jagermeister)
Listen: Dead, Dead, Fucking Dead (Music Video)
Why?: Hardcore, Irish style. 4:25pm on a Saturday is clearly a good time to throw down.

Where?: Red Bull stage
When?: Sunday @ 1:10pm
Who do they clash with?: Coal Chamber (Main), Graveyard (Zippo), Little Caesar (Pepsi Max), The Graveltones (Jagermeister)
Listen: She Bites (Music Video)
Why?: An early addition to Download Festival, Black Dogs have been waiting nearly six months to play their cards. A pretty horrible clash will cost them a few fans, but still expect a rowdy reception on fourth stage.

Where?: Doghouse stage
When?: Thursday @ 7:30pm
Who do they clash with?: N/A
Listen: Pacific Terror (Music Video)
Why?: One of the bands playing the Boardie Takeover on Thursday night, The Black Lanterns play punk metal by their own admission.

It’s almost here. This year’s Download Festival is this weekend coming where fans will be seeing main stage headline slots from Avenged Sevenfold, Guns N’ Roses’, and Ozzy Osbourne, along with a vast array of other acts across the three days. Read More

Following confirmation that Brand New will be headlining this year’s Hit The Deck Festival, the orgnaisers have now confirmed the first wave of bands who will be performing across the weekend, including The Word Alive, Read More

Following the end of their recent support slot with Enter Shikari, Canadian hardcore act Cancer Bats have just confirmed a full headline tour run across the UK in March. All dates of the tour along Read More

It is exactly a month today until this year’s Download Festival kicks off on the hallowed grounds of Donington Park, headlined by Def Leppard, Slipknot, and Tool. Read More

Sum 41 have released a video for their new track ‘Goddamn I’m Dead Again’. The track, an angry and infectious punk number, features a wild party down by an abandoned sewer, and is taken from the Read More